A Gamer Changer that Fuels Your Success.

The air was so thick with cigarette smoke, you could cut it with a knife.

The tension was palpable.

It was all systems go.

The lucky men chosen to escape were crowded into Block 104 of the Stalag Luft III POW Camp and were doing their best to remain calm and act normally while they waited for their turn to enter the tunnel and begin their crawl to freedom.

It was planned that 220 Allied prisoners of war would escape through the tunnel that night.

It had taken approximately 600 Officers of the British and Commonwealth Armed Forces 12 months to plan and prepare for the most daring and largest known escape from a POW camp of all time. They planned 3 three tunnels, “Tom”, “Dick” and “Harry”, but only Harry was completed – some 103 metres long – a monumental task of acquiring building materials and disposing of tonnes of dirt and sand dug up from beneath Stalag Luft III.

They also had to get their hands on enough rations, money, forged passports and travel permits, disguises, maps, train timetables, water bottles, camp rolls, portable stoves and compasses for the escapees.  No mean feat, let alone doing it under the constant surveillance of the German prison guards.

It was an amazing achievement of not only sheer determination, cunning and planning under extreme pressure, it was a massive testament that you can’t achieve anything great on your own.

Unfortunately, due to a number of unforeseen complications, the escape was detected by a German guard on a routine patrol who immediately raised the alarm.

Only 3 of the POW’s who managed to escape made it back home to safety.  Of the 73 re-captured, 50 were illegally executed in the forest by personal order of Adolf Hilter himself.  23 were sent back to prison camps.

a survivor of the Great Escape, was asked about his fears of crawling through a narrow tunnel underground, being buried alive or being discovered mid-escape and the subsequent punishment.  He explained that

to survive psychologically as a POW, your life needed purpose. As the prisoners in Stalag Luft III were all officers, they weren’t required to work, which left some of the sharpest minds and most courageous individuals, with much time to plot. And, escape was a duty, or at least you were expected to have a crack.

So, while only a handful of officers managed to reach home, the vision of the escape planted hope and purpose within each man to not only endure but to triumph, and their alliance, utilising the strengths of each, gave flight to their vision.

Anything great that’s been achieved has been due to strategic alliances between highly performing teams and individuals, all unified and focussed on the same end goal.  Alliances have and always will be a vital part of self-actualisation to achieve the vision.

Sun Tzu, The Art of War.

The leaders of Organisation X knew this and formed a leadership group of key officers who each would head up a certain aspect of the escape, based upon their skills and abilities.  No one man could have achieved what they achieved by himself.

What great alliances do you know of?

Do you think they could have achieved what they achieved without the alliance?

Are you part of an alliance to help you achieve your vision?

Another great advantage of alliances is that they require growing yourself personally.  If you are not growing and changing personally, but the person next to you is, (because their vision is stronger), it will dilute the effectiveness within the team.  So, it’s imperative that everyone involved with the alliance doesn’t merely co-exist and coast along next to each other, but rather ensure each member of the alliance has a crystal-clear picture of the vision that you’re all working towards, and you’re working with each other, pulling together as one unit to achieve it.  Though, if you’ve aligned yourself with true leaders, they’ll naturally lift and grow in response to being in a team of like-minded people.

Where do you need to change and grow to achieve your vision?

If you’re in an alliance, are your partners growing and changing too?

One of the major flaws in human nature is the desire of wanting to be Number One, all by ourselves.  Many believe that if you’re not cresting the peak, basking in the radiant glow of triumph, standing gloriously all by yourself, then your achievement is somehow marred or tarnished by the presence of others.

I believe many people have sold themselves, their teams, and maybe even indeed the world, short, due to this belief.

Are you comfortable in sharing success with others?

Misunderstanding the importance of strategic alliances, where you partner with other talented people to achieve the vision that has been set, will most likely at the very least, greatly hamper your efforts to achieve it.

Over the last 30 years, I’ve had the opportunity to partner with some significant leaders and entrepreneurs, because you can’t build anything great on your own. When I look back on my life, now that I’m 55 years of age, I’m able to see some real positive fruit from the leadership journey that I’ve embarked on. I’ve come a long way from where I grew up in Bradbury Campbelltown, in the Western Suburbs of Sydney, when my parents moved from London to start a new life in 1965, to where I am today.

Allowing myself to be led and developing strong strategic alliances in all areas of my life, gave me the opportunity to achieve some great things.  All of the successful people I know, in all different walks of life and professions, have fuelled their success by forging alliances with others who possess skills that they themselves don’t have.

Can you think of any strengths you need to align yourself with?

Would could you align with?

As you achieve each vision you have, you need to realise it gets more difficult to move on, but developing strategic alliances allows you to obtain wisdom and to personally develop in an environment where the team is more important than the individual. This ultimately empowers you to achieve things in your life that you never thought were possible.

Surrounding yourself with great strategic partners who have strengths and abilities that compliment yours, grows your awareness of your potential and the personal gifts that each team member has, to help each other to achieve the vision.

“Great things are never done by one person.  They’re done by a team of people.”

Knowledge and wisdom are more precious than gold, because if you have wisdom you can make gold.  You can’t make more gold with gold alone.

Experience and perspective gained through time, allowing yourself to learn from others more successful than you, partnering with them, will provide you with a greater opportunity to achieve the vision you’ve set for yourself.

You can’t build anything great on your own and strategic alliances lead to visionary leadership. For strategic alliances to be effective, they require 100% trust and loyalty, teachability, hearing and seeking advice from each other and require a certain level of intensity about deliberately “partnering” with one another.

When individuals in a team learn to combine their strengths and gifts, it ultimately strengthens the strategic alliance which will lead to a stronger more unified team, driving towards the vision, just like the 600 Officers in Organisation X and their great escape.

What I have also learnt is the longer the right people are together, the more intense the relationship with the alliance becomes, as emotional intelligence and rapport results in accountably, respect, honour, deeper rapport and even love, when teammates are totally sold out to each other, fighting to achieve the vision.

The most effective strategic alliances are the ones where there is genuine care about wanting to help people achieve their goals with integrity and sensitivity to other people’s beliefs. The new strategic alliance that I’ve recently become a part of, with some other outstanding leaders in their respective fields, has just launched! (You can check it out here – it’s awesome!)

The longer the journey, the sweeter the victory, when the ultimate vision is achieved. Not because of money, but because of the memories, the relationships and the value that each alliance member adds to the lives of the people that become part of the special community to achieve the vision.

Strategic alliances purify people’s motives because the teams heart becomes one. Not being in it for yourself, but being in it for somebody else. Strategic alliances will always allow you to develop new relationships and to grow emotionally to a higher level, which is not artificial, because team members celebrate the opportunity that they have been provided and the growth it creates, which leads to the self-actualisation of the vision being achieved.

So, can I close with this today – two is always better than one.  We need each other to achieve great success because working with others will always multiply the potential of each venture due to the experience and wisdom that becomes available at no cost from everyone involved. Strategic alliances magnify the best in each team member by adding value and encouragement to each other so that anything is possible.

It’s with one heart and one mind, unified and locked in on achieving the vision, sticking together, which gives you the greatest chance to achieve your vision.

Can I encourage you to seriously think about who you can form an alliance with?

You won’t look back.

I trust my articles can play a part in helping you grow your Leadership strength to live a better life!

I talk further about the power of association and alliances in my book, “The Dream Is Everything”.
If you’d like to receive a FREE e-copy, (RRP $24.95), click here.

Some other articles I’ve written you might find useful:

Do You Need to FLITU?

Exceptional Leaders Set the Example in These Key Areas, Part 2. 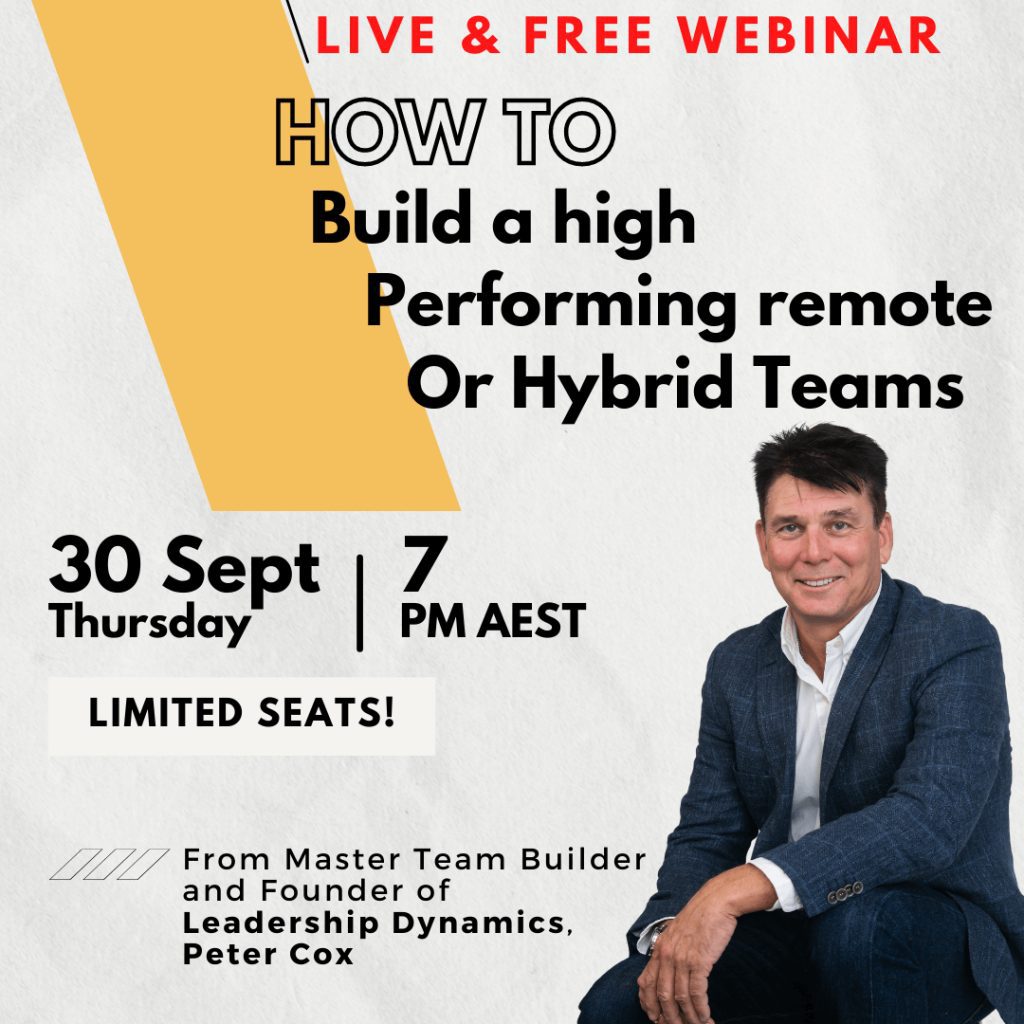